EXO Foundation has initiated a waste management project in Battambang, Cambodia in partnership with COMPED.

One of Cambodia’s most alluring urban centers situated to the west of Tonle Sap Lake, attracts large numbers of visitors wishing to discover its breathtaking selection of colonial architecture, it’s unique yet starkly contrasting personality. Both as a hub of local dynamism and being laid back to the point of being horizontal, the feel of Battambang is one of artistic revival.

Unfortunately for the local communities, and often going unseen by the travelers venturing through, the city and rural surroundings are being littered by tons of plastic waste each year. This waste contamination has serious consequences for the local wildlife, and inevitably causes health and sanitation concerns for the local population.

To combat this, the EXO Foundation has teamed up with COMPED – The Cambodian Education and Waste Management Organisation – and initiated a waste management pilot project in and around Battambang to alleviate some of the strain. Battambang was not worse off than any other city, but it was the ideal location to pilot the project given that COMPED were already actively engaged in the area, and the local authorities had shown an enthusiasm to take the problem seriously.

Learning how to make the plastic waste a valuable resource for the community, the EXO Foundation is aiming to provide sufficient motivation for the waste to be collected and avoid it ending up in the nearby water sources or degrading the surrounding natural environment.

The concept feeds off an idea developed by Pura Vida in Guatemala. The idea is to collect the non-organic waste (plastic bags, cigarette butts, Styrofoam, aluminum foil) that is littering the city and its surroundings, then fill plastic bottles with this waste that can then go on to be used as bricks, constructing walls, schools, houses, etc.

The project, aside from clearing waste sites and providing a financial incentive to local waste pickers – who may earn up to five times more than they would from empty plastic bottles – also has the added advantage of reducing the environmental impact caused by the production of bricks. Brick production is responsible for extensive deforestation, and high levels of CO2 emissions. Moreover brick production in developing countries such as Cambodia can involve using child labor exercised amid dangerous working conditions.

The project, designed and funded by the EXO Foundation, will be implemented by COMPED Siem Reap-based   organization. Husk a Siem Reap based organization, who have previously undertaken the idea to build schools (see pictures), collaborated with us by providing training to COMPED staff.

The project is one of the most comprehensive that the EXO Foundation has yet undertaken. It includes the distribution of a comic strip in khmer language designed to educate and build awareness of waste management issues, created by the EXO Foundation in collaboration with Phare Ponleu Selpak graphic design school Sonleuk Thmey. The English version can be viewed online here.

It will also involve selected local communities, cleaning their surroundings and filling bottles, and lastly the construction of a house within the COMPED center in Battambang. We wish as well to thank Maison Wat Kor, the only hotel in Battambang who answered positively to our call to give us their empty plastic bottles.

This pilot project, if successfully implemented, will be replicated in other areas of Cambodia, and the EXO Foundation has the further ambition of convincing the municipalities concerned to take ownership of the project and develop it further. EXO Foundation also intends to introduce the project to Laos, Myanmar and Vietnam and will be seeking support from local organizations as well as funding from donors to expand it. The cost of one house is approximately $15,000 to $20,000. 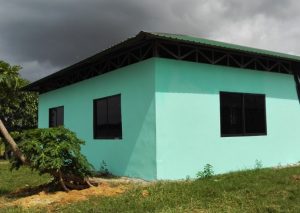 A fact sheet explaining the project can be downloaded here.